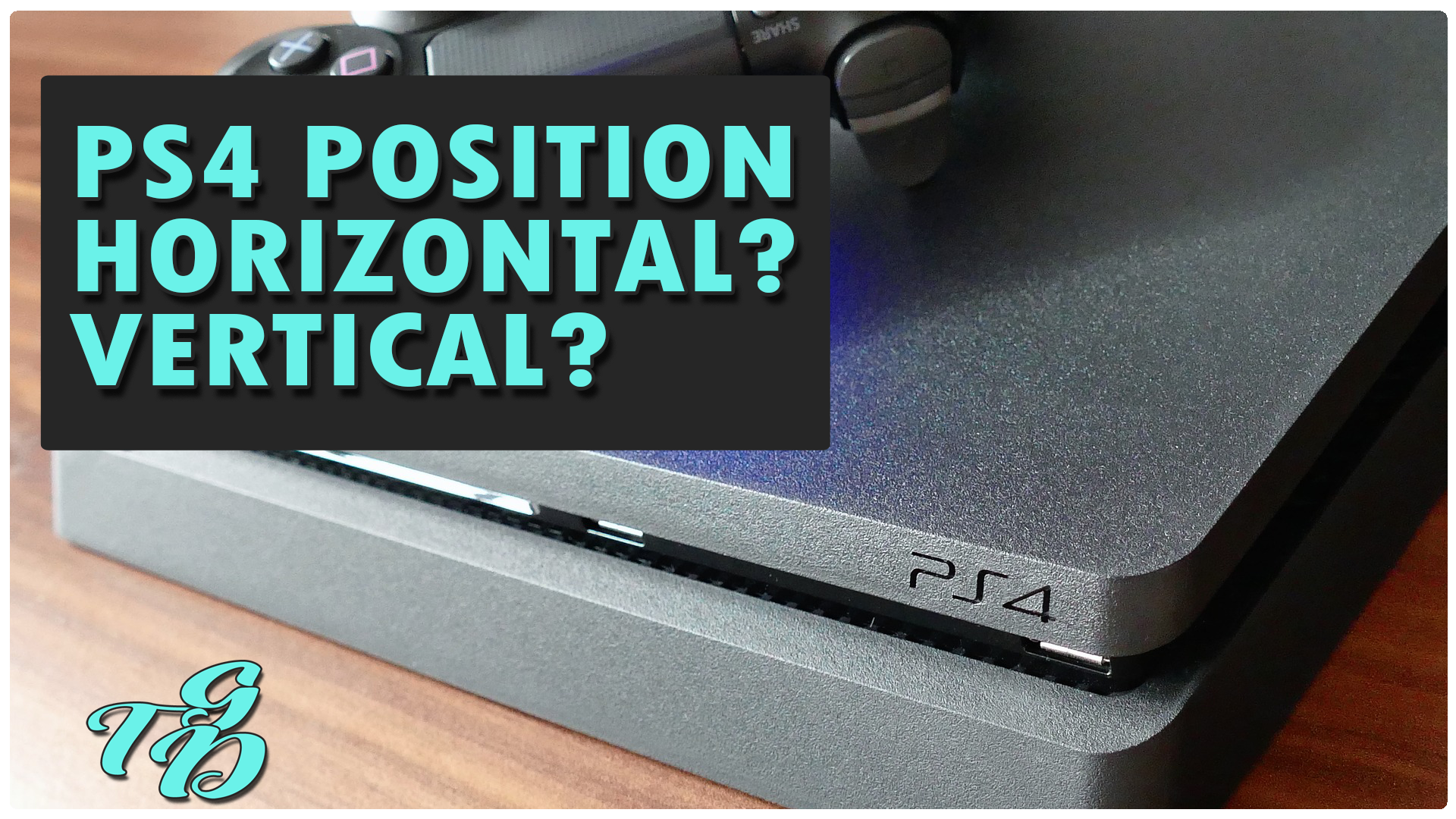 Every time I get a new console, I’m always left wondering what the best position is for it.

Sometimes they’re big and bulky, meaning that I have to re-adjust my setup to accommodate the new machine, but, it’s mostly out of concern for performance and heat dissapation.

In the past there’s been some consoles that would destroy your discs if it was moved with a game inside it (im looking at you xbox 360), so I’m always wary of how a console is supposed to sit.

So what’s the correct answer? Should your PS4 be vertical or horizontal? Is it even safe to be left on its side? Find out everything you need to know in this article.

Can You Use a PS4 Vertical Without A Stand?

While you can use your PS4 vertically without a stand, there are some downsides to doing so.

Because all of the PS4 Models are very blocky and have flat sides, all of them stand pretty well on their own vertically. However, should anything hit the console while it’s stood vertically, it’s almost certainly going to collapse.

This means if it’s on the floor, or a high traffic area, you probably want to place it flat for the time being.

Having your PS4 vertical without a stand when animals or children are around is just asking for problems.

Using A PS4 Vertical With A Stand

If you’re intent on using your PS4 in a vertical position then I recommend that you get a vertical PS4 stand.

Buying a vertical stand doesn’t need to be expensive. You can get the basic ones for <$15.

If you want to increase your budget, you can get some nice stands that have extra features such as charging stations and storage for your physical games.

Just keep in mind that adding a stand will take up extra space. It wont be as much as laying the console flat, but it’s more than not using a stand.

You’ll also have to buy a stand that fits your Playstation 4 Model, otherwise it wont properly support the console.

Some stands will even lift the console from the surface, allowing for better air flow when it’s on its side. You don’t really want your PS4 overheating in the middle of an online game do you?

The PS4 console is made to lay flat. There’s no doubt about that. Here’s a list of pros and cons to consider when having your PS4 sit horizontally.

Cooler Console: The way that the PS4 is designed, all of the cooling is around the middle and sides of the console. If you were to place it on its side, you’re effectively blocking some of the airflow.

Placing the console flat will make for optimal airflow. Meaning lower temperatures, less stress on your console and a quieter gaming experience.

Quiet Disc Drive: Disc drives are supposed to be placed flat. When they’re flat, the disc is sat perfectly and will create less noise as the console does what it needs to do.

Because of gravity, when a console is vertical the disc may be likely to move. It wont necessarily cause any bad, but it could make the occasional noise.

Impossible to knock over: It shouldn’t really come as a surprise but knocking over electrical hardware is not good.

Placing the console flat on a surface is much safer. Sure you could stand on it, or even kick it across the room but there’s much less chance of being damaged in a fall when placed flat.

Takes up more room: The most common reason anyone looks to put their console on its side is probably due to space. Depending on your setup, you may not have a choice in the way which your console sits.

As of right now, I have mine sat on a table next to two monitors. Thankfully mine slots in flat, in-between the monitors, but if I had a smaller desk, I’d probably have it standing up instead.

Wobbly: I haven’t experience this myself, but, sometimes you may find there’s a little bit of wobble on some consoles. I believe this is because the rubber feet aren’t the same size or some may even be missing.

If this is the case, it doesn’t take much to fix it. Simply put some paper or card underneath or buy another rubber foot.

You could also get a horizontal stand. They cost around $15.

I haven’t had this issue myself, I believe it’s pretty rare.

You can put your PS4 vertically, but there are more cons to doing this. It’s a lot more riskier in-terms of potential damage your console.

Takes Up Less Space: Even with a stand, placing the PS4 in a vertical position will take up a lot less space.

While I’d recommend trying to clear a space so that you can lay it flat, I’ll accept that it’s not always possible.

Looks Better: Ever since the PS2 and Original Xbox, the consoles have looked better when placed standing up. They’ve also worked perfectly well stood on their side.

As long as you dont move the console while it’s turned on or has a disc in it, you should be fine.

Noisier: When the playstation is on its side, the disc drive can often become a little bit noisier. This may be because the disc is slightly less secure when the disc drive is vertical.

It’s nothing too major, just the noise of the disc being read will be a little more apparent.

Risk of falling: The biggest con to putting your playstation in a vertical position has to be the fact that it’s more likely to fall.

If you don’t have a stand, the playstation will fall over with the slightest of knocks. As the playstation hits the solid surface, it could cause a lot of damage to the components inside.

You may be lucky and avoid any serious damage the first time, however, if its to happen often, you may find that your PS4 starts to develop issues over time.

Increased temperatures: Another reason not to put your PS4 In a vertical position is because of the decreased airflow.

While some stands lift the console so that air can get into, others dont. Not even using a stand will also leave your PlayStation suffocated against a flat surface, meaning less airflow.

To avoid this, you should buy a stand that allows enough room under the side of the playstation for adequate airflow, or even adds extra cooling.

Costs more to buy a stand: In all honesty, PS4 stands are pretty cheap.

Admittedly, once you’ve already spent 100’s on a console, controller and games, buying a stand may be the last thing on your mind.

It also seems rather unnecessary to buy a stand when the console can sit vertically on its own, but the added sturdiness is very useful.

So, Should Your PS4 Be Vertical Or Horizontal?

At the end of the day, it’s your console and it’s very unlikely you’re going to see any major side effects from having it sit vertically.

As long as you take care of your property, don’t knock it over and don’t try to move it while it’s switched on, I’m certain it will see you through until the next-generation of consoles.

The worst thing you can do is overthink it. Just do what suits you.