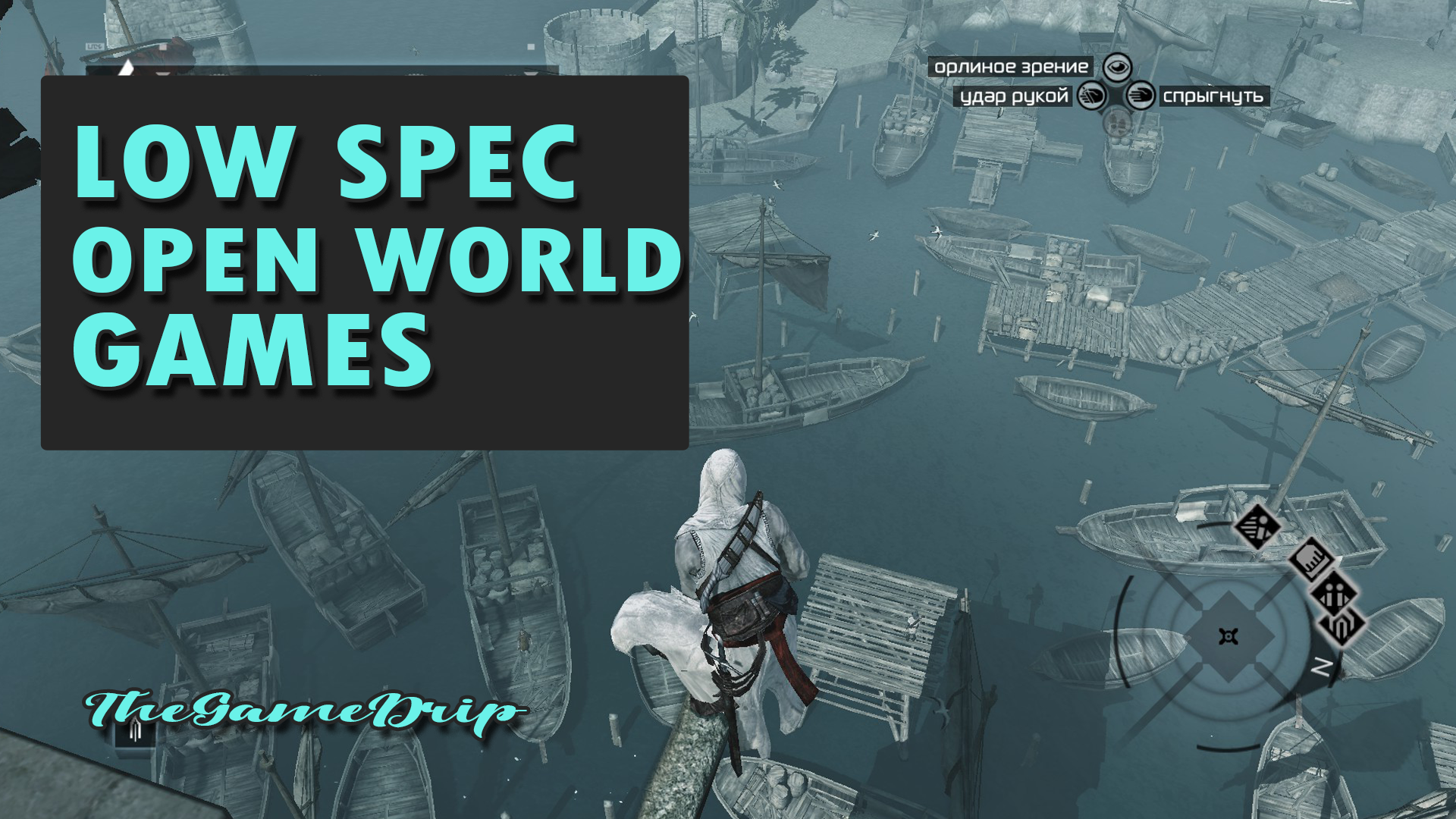 Unfortunately, because of the type of game that Open World PC games are, it’s a struggle finding ones with low system requirements.

If you want to play a game that has a huge map and endless possibilities, it’s only fair to expect them to be demanding on your PC.

Thankfully, if you want your open world fix, you can buy older games. However, the graphics are nowhere near as good as the latest and greatest AAA titles.

Over the years, I’ve played a lot of games and had a lot of fun.

throughout the past 10 years, I found these games to be the best Open World PC Games with low system requirements.

It’s important to remember that the “demanding” games of today, are the “low spec” games of tomorrow.

A lot of the games on this list (at the time) were considered to be demanding titles that only high-end PCs could run.

Saying that. a lot of these games still require dedicated graphics cards as a minimum. They could run on integrated, however, it may not be an enjoyable experience.

If you’re struggling to find low spec games to play, it may be time to upgrade your PC. The other option would be to switch to console or mobile gaming as they’re considered more “affordable”.

Here is a list of what I consider to be the best open-world games for low-end PCs.

If you’re in the mood for an open world action-adventure game, just cause is a great place to start.

There are 4 Different Just Cause Games released. If, as the article suggests you have a low-end PC, only Just Cause 1 & 2 will be playable.

That’s nothing to get upset over though. Just Cause 1 & 2 are both open-world third-person shooters with a large environment that’ll keep you entertained for hours.

The shooting, walking, swimming, jumping, and grappling means you can move around the map quickly, causing fights and wreaking havoc.

There’s also an abundance of vehicles in these games, meaning you can mess around in any way imaginable, blowing up cars, helicopters, and much more.

If you’re in it for the storyline, it will take you approximately 20 hours to complete the main story and side quests on Just Cause.

Whereas just cause 2 comes with almost twice the amount of content, taking 37 hours to complete the main story and extras.

For those that want to create havoc in an online environment, there is a Multiplayer mod for Just Cause 2. I played it a lot back in the day, it was pretty enjoyable, but I’m not sure if it’s populated now.

Out of the two games, I’d recommend Just Cause 2 the most.
Being released in 2010 it looks much better and has the MP mod that can give you many extra hours of fun with friends.

Assassins creed is another game that I spent the majority of my younger years playing.

It’s been beaten to death now I think, but the first and second games were great fun and require very little hardware to run.

The same goes for Assassins Creed Rogue. I haven’t played it, but it has a lot of good reviews.

As the name of the game suggests, Assassins creed is about assassins.

It’s an open-world action & adventure game that’s tailored around stealth and parkour, making it really fun to just run around and explore the map.

The storyline is fairly decent too.

Unfortunately, there’s no multiplayer on these games. But I’ll admit, I wasn’t a fan of the MP modes that have been offered in the more recent editions.

You can pick both of these games up fairly cheap on CD Key sites, or wait for a steam/Ubisoft sale and buy them then.

While none of the Arma games are particularly well optimized, they’re a hell of a lot of fun.

Arma 2 was the reason that I became serious about PC gaming. All you need to do is watch a couple of Youtube videos to understand how fun this game can be.

At the heart, it’s a military sim game, but it was the perfect foundation for many entertaining mods that followed.

I spent most of my time playing Arma Life but Wasteland and DayZ were also great fun when I wanted to switch it up.

Unfortunately being 10 years old, the game has kind of died out. If you want to play online and have the same fun I did back in the day, you probably need to join a gaming community.

That said, if you fancy a realistic military experience, then Arma 2 has 20+ hours of gameplay, with Operation Arrowhead offering another 38+.

Like most of the older games, if you’re willing to buy from a third party key seller, it will cost a matter of pennies. Whenever it goes on sale on steam, it’s normally available at an 80% discount.

Whenever you read one of these lists, the first game that’s mentioned is GTA. While they’re great games, It’s fun to change it up and try something new.

Saints Row is a series that’s considered to be very similar to GTA, especially the earlier titles. However, they’re much wackier and in-some cases, pretty over the top.

The main aim of the game is to defeat rival gangs and take over the city. While doing this you’ll face numerous rival gangs, as well as the law.

There’s a whole load of customization options as well as a pretty cool progression system that keeps you hustling for money and respect.

Once you’ve gained enough respect you’ll be able to unlock more ridiculous features such as infinite sprint and no fall damage.

There’s more than enough playability in this game. If you buy “The Full Package” it could take you over 50 hours to complete.

If you like the game and have a slightly more up to date gaming pc, you may even want to try Saints Row IV & Saints Row Gat Out Of Hell.

It’s pretty ironic that this game was considered to be very graphically demanding at the time and was used as a benchmark for many youtube videos.

Far Cry 3 was released in 2012 by Ubisoft and is one of the best open-world FPS games I’ve played to date.

The campaign is set on a fictional, tropical island that’s controlled by bandits and pirates. You’ll join the native people of the island, slowly working together to reclaim the island.

Similar to games such as Red Dead Redemption, once you’ve completed the main storyline, there’s so much more to do.

Farcry 3 has an abundance of side quests, hunting quests, and even assassination missions.

I have to say, this is the best-looking game on the list but it’s also a little more demanding than the rest.

Farcy 2 Is a fully open world and is far less demanding, but it’s much older and not as fun.

I absolutely hate the fact that Roblox has made this list, but it kind of has to.

Back in the day, the go-to game was Garrys Mod an open-world sandbox based on the source engine. Today that game is Roblox.

Roblox has a very passionate community and there are many different mods and game modes available to play.

If you can overlook the fact that this is a playground for children, it’s certainly a good game and is very easy to run.

Of course, if you’re a kid yourself, this may be the idea of paradise to you anyway.

Another added benefit is the fact that Roblox is completely free to play.

Everybody knows Fallout and for good reason.

This game is probably the most popular open-world RPG you’ll ever find (outside of Skyrim maybe).

The game that I recommend the most is Fallout New Vegas, Fallout 3 is also a good shout.

You could go back to Fallout 1 & 2 but they’re so old now and pretty painful to play.

I’ll admit, while a great game, Fallout is not for everyone. I personally found it too slow when I played it back in the day.

However, if you are into post-apocalyptic RPGs there is over 60 hours of gameplay in Fallout 3 GOTY.

Once you’ve completed Fallout 3, why not dedicate another 100+ hours to complete Fallout New Vegas Ultimate Edition?

While Fallout does have low requirements by todays standards, they still require a semi-decent setup. Don’t expect it to run well on a laptop, unless it has a dedicated GPU or MX150 chip.

If you’re a fan of racing games, you’ve probably played a majority of the Need For Speed games already. They were certainly a big part of my youth.

The only problem when I recommend you to get these games is that they’re actually hard to find online in a legitimate way.

Games such as NFS Underground, Underground 2, and even the original Most Wanted can be hard to get your hands on.

If you can get them, and maybe even the Redux versions, I cannot recommend them enough. They’re super fun and were arguably the peak of the NFS series.

Most of the recent Need For Speeds are available on Steam.

Out of the games on steam, I’d recommend NFS Undercover & NFS Hot Pursuit for people with low-end PCs.

I also like the NFS Shift Series, however, they’re not open world, so I’m not going to recommend them here.

Even though I’ve listed what I consider to be the best Open World games for those with low end PCs, there are still many many more out there.

Some recommendations that I didn’t full cover are:

If there are any more that you’d recommend. Feel free to get in touch and I’ll add them to this list.

Low Spec Steam Games That You Can Play For free