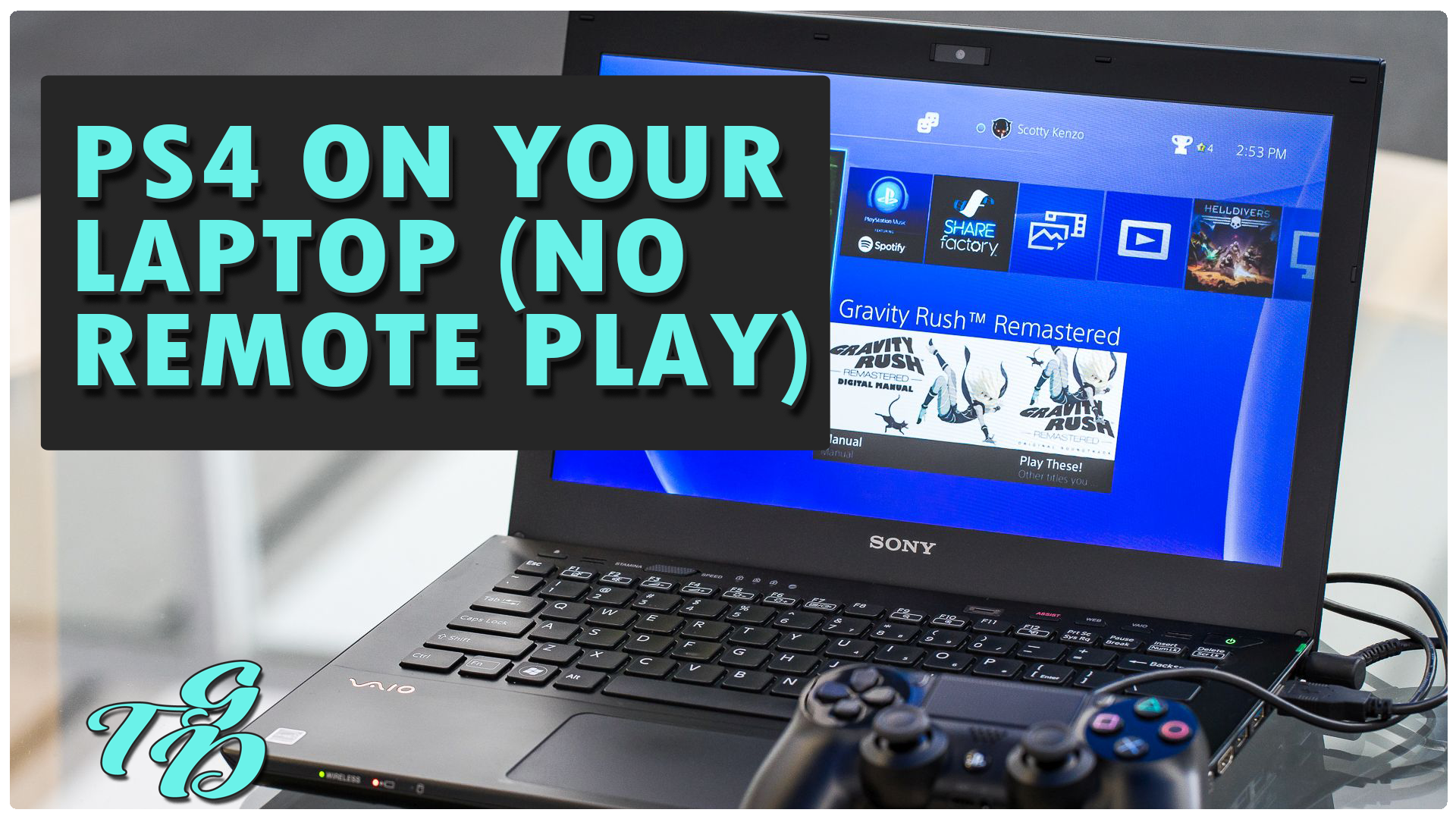 PS4 Remote Play was designed to let you stream and play your PS4 games anywhere in your home, on any compatible device, that’s connected to your broadband.

As a concept, this is great, however, there are minimum requirements. The biggest obstacle being 5Mbps Internet, but, Sony actually recommends 12Mbps via an Ethernet cable for the best experience.

Even with the “optimal” setup, once you actually test the software and experience the input lag, you’ll find that it’s pretty much useless. Therefore you’ll need an alternative.

Currently the best way to play PS4 On a laptop without remote play is using a capture card.

Now this isn’t going to be the cable-free setup that remote play would offer, but, it’s 100% input lag free and lets you play PS4 on your laptop without the need for remote play.

Here’s exactly how to use a laptop as a monitor for PS4 and the equipment that you’ll need to do it.

Using A PS4 Controller On A Laptop Without Remote Play

If you’re planning on playing your PS4 on a laptop without the use of remote play, you’ll still need to connect a controller directly to the PS4 console.

Unfortunately there’s no other solution, you’ll still need to be within the vicinity of your PS4 Console.

This is because you’re only re-directing the output to your laptop. Whereas the remote play software is specifically built to use your controller.

If you’re looking to play PC games using a DS4 controller, that’s a different story. You can easily hook it up using the USB Charger & DS4Windows or even by using bluetooth.

How To Play PS4 On Your Laptop Without Remote Play

Now, the first thing you’ll need is a game capture card. These can be expensive pieces of equipment, so this method may already be a write-off for some.

The capture card that I’d recommend is the Elgato Game Capture HD60, however, any HD game capture device will work.

Once you’ve chosen your game capture, here’s how to use your laptop as a monitor for your PS4.

Step 1: First of all, whenever you’re setting up a new game capture device, you should download and install any official apps and drivers that are required.

Some of them self-install drivers when you plug them into windows and they’ll be usable on software such as OBS. However, for the best experience you should do it properly and use the official software.

Step 2: Now it’s time to connect your capture device to your laptop. In most cases this is super straightforward, If you want to research it further, I’m sure there are many tutorials online for your exact device.

With most devices, they’ll simply require you to plug a HDMI from the PS4 into the capture device, with another HDMI cable plugged into a monitor of your choice.

Most game capture devices will also come with a USB cable of some type, this is what powers the device and captures the video signal from the console.

When you can, try and plug this into a USB 3.0 socket, I don’t believe it makes much difference, however, it’s supposed to be faster than a tradition 2.0 socket.

Step 3: Once you’ve gotten everything installed and plugged in, it’s now time to open up the game capture app on your laptop.

Normally, the best software to use is the one that comes with your capture device, but you will also be able to use 3rd party software if you’d prefer.

When you load up the software, you’ll probably find it takes a while to accept the signal, but after a couple of refreshes everything should work.

If it doesn’t, you may need to disable HDCP protection on your console.

To disable this feature, select (Settings) > [System] and then clear the checkbox for [Enable HDCP].

If you’ve done that and it still doesn’t work, try to play around with the software and device setup to try and solve the problem.

Step 4: Now that everything is setup properly you can sit back and enjoy your game on either your laptop screen or the chosen HDMI output.

Keep in mind that if your laptop isn’t of decent specification, the gameplay may not be as smooth as it would be on a console.

You’ll also find that it gets much worse if you’re recording or streaming while trying to play off of the laptop.

If PS4 Games Were Supposed To Be Played On PC

Then Sony would probably just release them on PC.

Microsoft and Xbox already do this, however, we’re yet to see Sony make any moves on that front, other than releasing remote play.

For now, the best option is playing on your laptop using a capture card but unfortunately it’s not a viable solution for everyone.

I guess the positive is that you can now also start your YouTube and Twitch career if you really want!