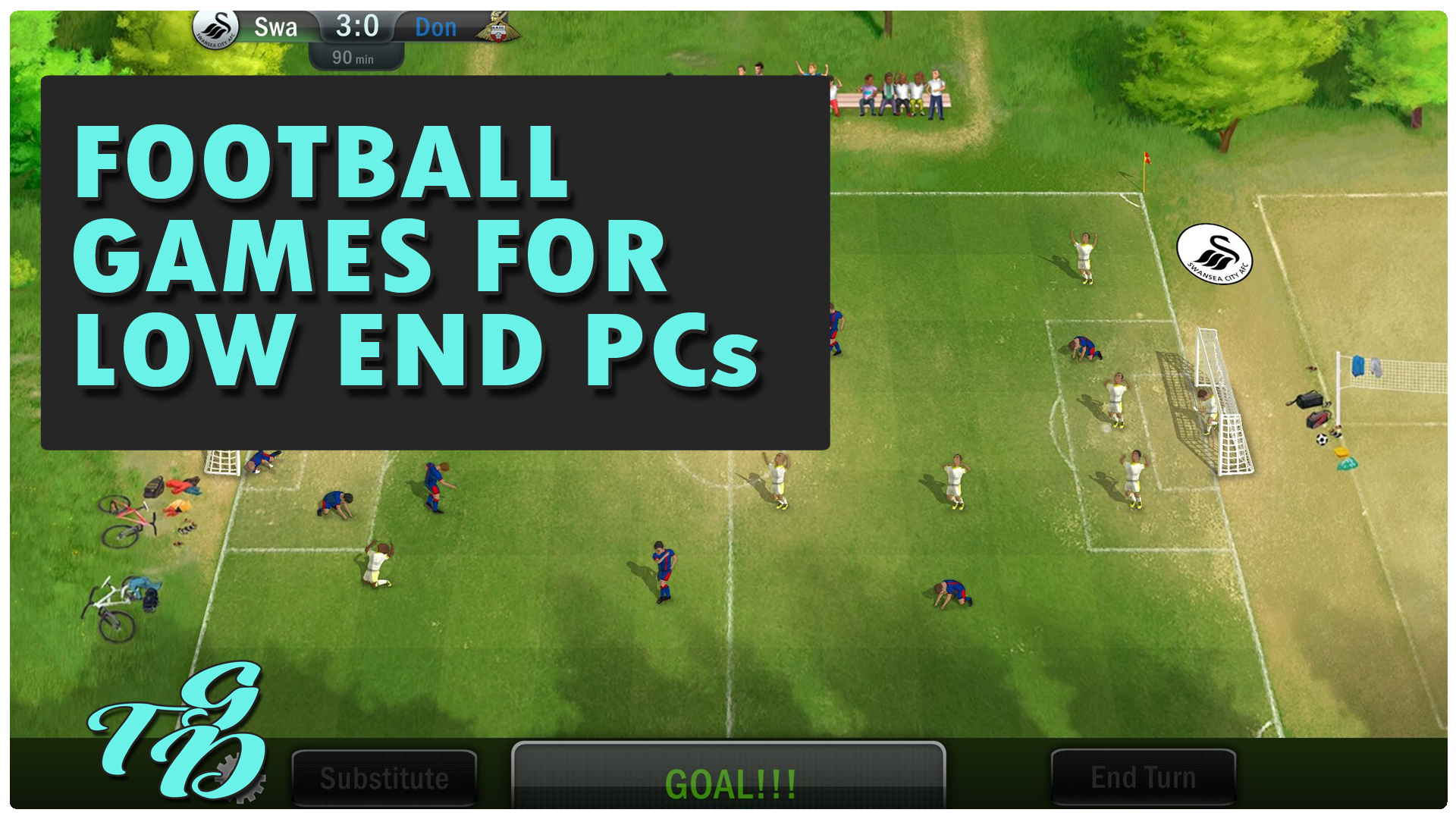 As a football fan myself, I’m all too familiar with football games, especially on PC.

Up until recently, the PC requirements for football games has not been too demanding.

However, since EA introduced the Ignite (FIFA 15) & Frostbite engines (FIFA 17), the minimum requirements have shot up.

In this article I’ll list the best football games for low end PCs. Alternatively, you could watch our video.

Football Manager is a game that I’ve invested way too many hours into. I’ve racked up just 437 this year, but in the past it’s been as much as 2,500.

While this title doesn’t actually include “playing football” in the same way as FIFA or PES does, you may find you actually enjoy it more.

Football Manager does exactly what it says on the label. You’re a manager and your job is to take the club or nation of your choice to glory.

At first glance, the game can seem overwhelming. But there are different levels of gameplay.

FMTouch offers a more streamlined version, or you can play normally and choose how much help you get from backroom staff.

I would suggest taking the time to learn the in’s and out’s though. It’s a brilliant game that can take you on an emotional journey, making you love and hate players, members of staff and clubs that you never even knew existed.

While Football Manager can be a demanding game for your PC if you want, the ability to choose the number of leagues you want to load allows you to run it at a level your PC is comfortable with.

You can also switch between text, 2d and 3d views for match days, meaning you don’t really need a dedicated GPU either.

It’s the perfect football game for those with laptops and low end PCs.

If the prospect of football manager was a little daunting, maybe Football, Tactics & Glory is for you.

This turned based football manager game lets you control your players as if they’re chest pieces on a football pitch prioritising strategic planning over micro management.

Yes every decision effects your clubs fate, but you’re not left having to spend hours with tedious contract renewals or backroom staff changes to get the slightest advantage over your opponents.

Instead you can focus on the game we all love, football.

The amount of content in this game, especially for the price is almost unbelievable.

You’re able to edit the players faces and styles, control your clubs financial situation and even mod the game to include real life leagues.

As for actual gameplay, there’s a single player career mode, split screen and even online PVP.

They’re also planning a major DLC in autumn which will allow you to do a journeyman type save, starting in the bottom leagues and moving from club to club until you’re one of the most notorious managers in the game.

Super soccer blast is a newly released game on indie game on Steam.

As an early access indie title, there’s not too much content. The general idea is that you create a team and play against a friend in a friendly match or take on the AI in the world tour mode.

Don’t expect to recognise any of the players though. None of them are licensed, however, in the future if the game gets a following, there may be modding capabilities. (unlikely though).

At the end of the day, for the price and the low performance requirements, you’ll be able to get some fun out of this game.

If you’re looking for a realistic footballing experience, I suggest looking elsewhere.

It’s nothing like FIFA or PES, the creators themselves compared it to over the top classic titles such as International Superstar Soccer. These games are fun in their own way, but can get old fast.

I don’t know about you, but as a kid I was always collecting football cards and stickers.

With Hearthstone and Magic being so popular, I’ve always wondered why there isn’t a match attax trading card game for the PC.

Football Drama is a football card game that’s forces you into the life of a manager with a struggling squad and a point to prove.

You’ll be taken on a journey where you have to train your players, make hard decisions and keep the drama at bay. After all, the billionaire chairman just axed another boss to get you, he could do the same again…

I definitely rate this game.

It’s a very different take on football management, and offers a much different experience than any other football game I’ve played.

I’m still waiting for that hearthstone/football like game, however, for $10 or so, this is quite the interesting game. Especially for those that enjoy narrated single player games.

Unfortunately, most of the time, these games just dont scratch the itch in the way that you’d hope.

In this situation, your best bet is to play an older version of FIFA or PES that you can actually run reasonably well on the hardware you have.

I certainly wouldn’t mind going back and playing games such as PES 6 or any of the FIFAs between 06 and 12. In-fact it would probably be a welcome trip down memory lane.

Of course, you don’t actually need to go as far back as that. As before mentioned, the games were easy to run up until the 15/16 season.

When I was a kid, the football addiction never stopped.

Whenever I had free time on the computer at school I’d always hop onto mousebreaker and play Jumpers For Goalposts, Footbal Tycoon or even Soccer Heads.

If you’re just looking for something to take away the boredom and pass some time, why not try out a free flash game? You’ll be surprised at how involved you may actually become.