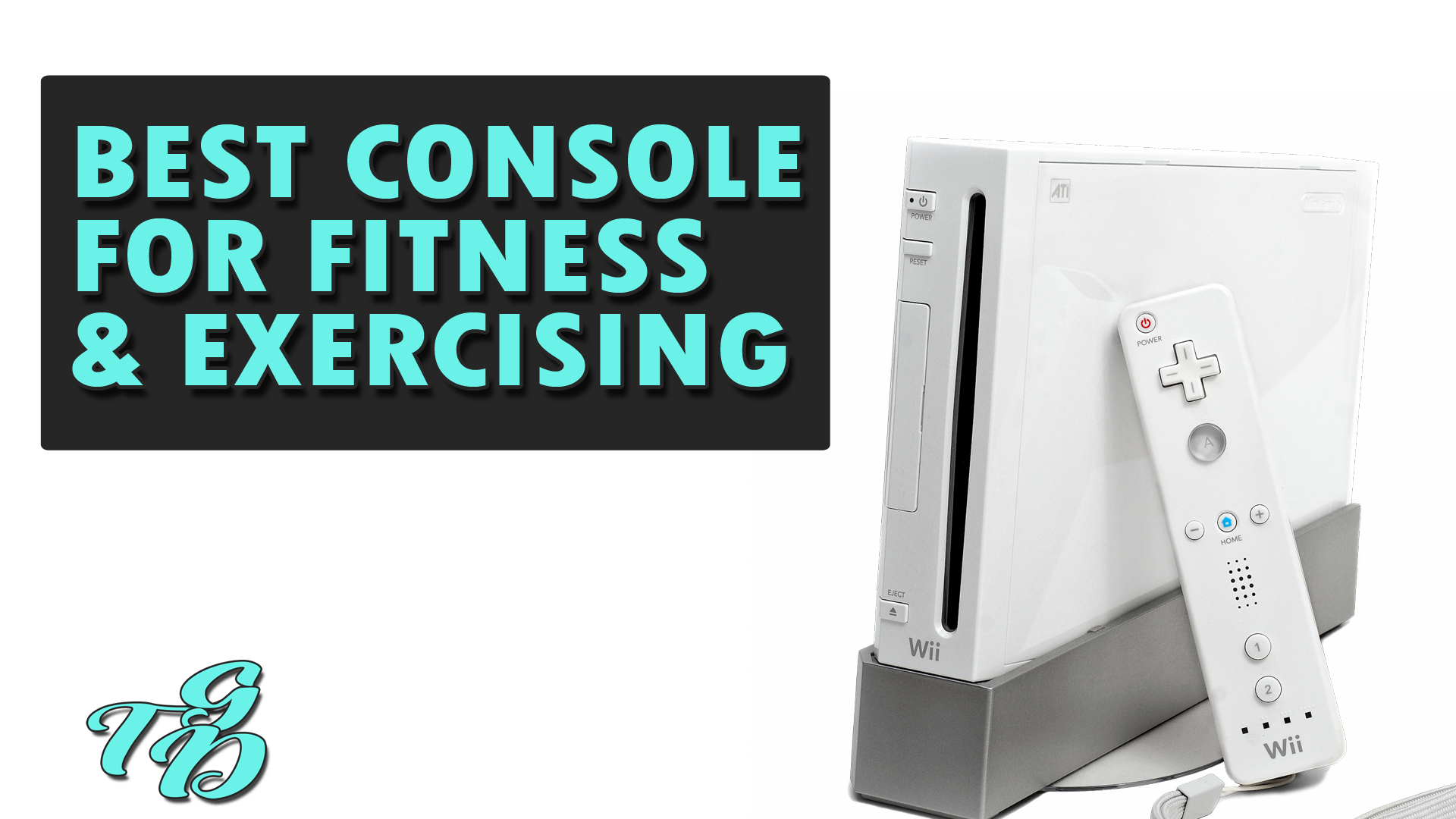 There are many reasons why you’d want to work out at home.

It could be due to recent world events or maybe you’re shy to work out around others. Whatever is stopping you, I’ve got the perfect answer.

Video games and console get a lot of negative press. How many times have you read about some of the positive health benefits in the news?

When used properly, game consoles are able to give you a gruelling workout in the comfort of your own home.

What makes it even better is that you don’t even notice it. Since you’re playing a game, the focus is on enjoying yourself rather than the fact you’re working out.

The Nintendo Switch is regarded to be the best game console for fitness, but, every console offers their own unique experience.

If you can’t afford a switch, I’d recommend buying a Nintendo Wii instead.

I believe that Nintendo offer the best platforms for working out.

For as long as I can remember, Nintendo have always focused on interactive gameplay.

It started back in 1986 when Bandai released the Power Pad, which then reappeared in 2007 for the Wii console.

The nintendo gaming experience is completely different from any other.

Over the years the Wii, Wii U and now the Switch have been highly interactive and encourage gamers to move as they play.

While the nintendo switch may look like nothing more than a gimmicky game console to some, it can make you work up a serious sweat.

Using the joy-cons and various other accessories, games are able to track your arm and body movements with ease.

Ring fit is a good example of what the joycons can do when used creatively.

While they don’t track your movement from left to right, or around the room. They can tell when you’re running, jogging, jumping up and down and flailing your arms about.

These are the perfect controllers for games such as:

Unfortunately, if you’re looking for something inexpensive that will keep you active, the switch is not the console for you.

A complete console and some fitness games could set you back around $500.

If you want to keep it nintendo, the Wii is a good alternative with games such as Wii Fit and EA Sports Active.

However, you may also find that you’re more interested in a completely hands-free experience which the Xbox One & Kinect would allow.

With the Xbox Series X come very soon, Microsoft have recently announced the death of the Kinect.

The Kinect accessory was first released alongside the Xbox 360 and was re-released as an Xbox One accessory.

This was Microsofts’ attempt at entering the motion controlled gaming market, and to be honest. It was for the most part, lacklustre.

The main benefits of choosing an Xbox One With Kinect is:

Unfortunately the Xbox 360 Kinect isn’t as advanced, but it is much cheaper. An xbox 360 is a more temporary solution until the gyms and sports clubs fully return.

The main games for Xbox One Kinect are:

Thanks to backwards compatibility, you can also play most of the Xbox 360 Kinect titles on Xbox one.

Buying An Xbox One with Kinect second hand should only set you back around $100-$200. However, buying brand new from Amazon would be a different story.

The Nintendo Wii is the console that brought fitness to my attention when I was younger.

The thought of being able to play a game and make gains at the same time was super cool.

Without a doubt, the best thing about the Wii, has to be Wii Fit & Wii Fit Plus.

Wii Fit is a video game that’s bundled with a balance board.

The balance board has many features, but, it’s mostly used to track the players centre of balance and can help to improve posture.

If you have accountability issues, Wii Fit is also great for that.

The game allows you to create a profile with your height, D.O.B & Bodyweight to help you keep track of your progress.

Instead of jumping on the scales every morning, load up your Wii and step on the balance board.

Looking back, this may be the ultimate console for exercising with games such as:

All available on the platform.

What makes it even better now, is the fact that it’s so cheap to buy.

At the time of release, this console was highly demanded, but it doesn’t seem to have aged too well. Because of this, there’s a lot of consoles and games up for sale at super low prices.

Buying a Wii will also grant you hours of non-fitness entertainment. There’s a lot of quirky arcade games and even interactive FPS titles such as Call of Duty.

If you can stomach the 480p resolution, it’s certainly an option you should consider.

Back in the day, Sony were ahead of the game, releasing EyeToy with the Playstation 2 console. Now, in 2020, they’re outpacing microsoft with PSVR.

If you don’t already know what Playstation VR is, it’s a virtual reality headset.

It’s designed to be fully functional with all PS4 and PS5 consoles. With the next generation right around the corner, you don’t need to worry about your VR headset being outdated.

The main issue is the amount of hardware and equipment required. To use PSVR properly, you need the headset, Move Motion Controllers and an Eye camera.

Jumping around and working up a sweat with a heavy headset and 2 controllers in your hands probably doesn’t sound that appealing… because it’s not.

Admittedly, the PSVR is more suited to gamers that want an immersive gaming experience. However there are a number of titles that will get you up off the couch and working out:

Unfortunately, as of right now, the game selection for PSVR is pretty limited. Hopefully it will expand with the release of the PS5, but for now, you’re stuck with mostly boxing games.

If you’re buying a console purely for fitness games, I’d choose one of the other consoles mentioned in this article.

But, If you want an all-round gaming experience with the option of working out, the PS4 & soon to be released PS5 is probably your best bet.

There isn’t many situations where “serious” gamers would recommend a Nintendo console over Microsoft or Sonys offerings, but, in this scenario I probably would.

Nintendo offer such a unique and interactive experience that other game companies could only dream of.

It should come as no surprise that the most interactive platform is also the best for fitness games and general aerobic activity.

If you have the money, buy a Nintendo Switch.

If you want a budget option, buy a Nintendo Wii.

5 Reasons To Switch From A Laptop To A Desktop PC